Over the years, Jeeps have earned a reputation for being durable off-road machines equipped with enough capability to handle tough terrain right out of the box. But one’s perception of what constitutes an off-roading excursion can vary widely with another’s. This 2013 Jeep JK has plenty of off-road capability as it stands, but it lacks protection from serious potential damage that can happen when out wheeling.

Like any consumer vehicle, the Jeep JK rolls out of the factory with components that are tailored to the most common demands of end users. While that’s fine for the majority of buyers – most of which will rarely hit the dirt in earnest, if at all – folks who plan to really exploit the advantages of the Jeep platform will quickly discover where there is room for improvement over the OEM design.

While Jeeps can certainly handle their fair share of abuse out on the trail, the stock body pieces can leave something to be desired when it comes to protection. Fortunately, Extreme Terrain offers a number of components that can bolster your Jeep’s ability to shield vital mechanical and body components from damage while out on the trail.

Accordingly, we’re installing a set of Barricade Trail Force front and rear bumpers along with a pair of Barricade rock sliders on this 2013 JK to help keep the goods protected while adding a bit of functionality along the way. Although the factory bumpers might provide some defense during a quick bout of parking-by-braille, they’re not really designed for the rigors of serious off-roading. “The biggest advantage to aftermarket bumpers is that they hold up better to contact with trail obstacles than the factory plastic bumpers do,” says Ryan Huck of Extreme Terrain. “Aftermarket steel bumpers will also have other features which are great for off-roading, like additional light mounts, winch mounts and recovery points, too.” The stock front bumper (left) is the first piece we’re sending to the dumpster. Seeing the two parts side by side, the benefits of the Extreme Terrain’s heavy duty construction are obvious. Its enhanced features, which include the ability to add a 12,000-pound winch, will likely come in handy out on the trail.

Made from 5/32-inch stainless steel plating and 2×0.120-inch tubing, the Barricade Train Force HD front bumper (PN J20850) uses a two-stage finish with an epoxy pre-coating and a textured black powder coating for long lasting durability – the sharp looks are just an added bonus. The metal bumper’s design is a balancing act between providing enhanced strength and keeping weight down as much as possible, and the stainless steel provides the benefit of rust protection. Since the new bumper uses the factory-installed fog lights, the wiring harness needed to be extended a bit. Be aware that the fog light housings from Rubicon X and some special edition JK models utilize a fog light bracket which will not fit this bumper. You will need to obtain a standard factory fog light bracket for use with this bumper if this situation applies.

While the stock bumper featured just a pair of fog lights, the Barricade piece steps up the front bumper’s functionality substantially, offering two high-strength D-Ring mounts and a built-in winch plate capable of handling a 12,000-pound winch. Huck says the guesswork for what type of winch will fit is also kept to a minimum with the Extreme Terrain bumper.

“The mounting hole pattern for winches is pretty much standardized,” Huck explains. “Most any winch will fit on most any bumper designed to support a winch. The only restriction you might run into is with sunken winch mounts, which is not an issue here. The only other issue is with winches that have exceptionally large bodies like the Warn Zeon series, for instance.” The Barricade rock sliders (right) would act as steps just as the stock units did, but with the added benefit of protecting the Jeep’s body from underside damage while off-roading.

Rock sliders go several steps further than running boards, and Extreme Terrain’s Barricade Rock Sliders (PN J100289) go far beyond the stock pieces in terms of protecting the Jeep’s body against damage. “These rock sliders are designed to protect the body of the Jeep and also the doors which can be damaged when there is a heavy impact to an unprotected rocker panel,” Huck pointed out.

Rock sliders are important because they protect an area of the Jeep which is otherwise very susceptible to trail damage. – Ryan Huck, Extreme Terrain

“Rock sliders are important because they protect an area of the Jeep which is otherwise very susceptible to trail damage,” continued Huck. “The rocker panels of the Jeep are essentially unprotected from the factory and hard contact with a stump or rock can push the rocker into the door, causing major and expensive damage. When you’re doing more hardcore rock crawling, rock sliders will also help you slide over boulders to get down the trail without damage.”

The Barricade Rock Sliders are manufactured from heavy-duty two-inch diameter (0.12-inch wall thickness) stainless steel tubing, and like the Extreme Terrain bumpers, they feature a textured black powder coat finish and are a direct bolt-on part for Jeep JK models.

While there isn’t much else in the area of the rockers that needs protecting other than the rocker themselves and the doors above them, rock sliders have the inherent added benefits of not only looking the part but also providing a convenient step for ingress and egress, which can be particularly useful with off-road vehicles equipped with aftermarket suspension mods.

Left to right: a hydraulic drill snaps the bolts into place; the torque wrench applies 80 ft-lbs of torque to secure the rock sliders; the rock sliders are looking ready for action.

Rounding Out The Look The stock rear bumper (left) is a disappointing hunk of plastic compared to the beefier, D-ring-equipped, solid steel Barricade unit.

Of course, we’d be remiss if we neglected to upgrade the rear bumper to match the front. To that end, the Barricade Trail Force HD rear bumper (PN J100291) not only helps round out the new aesthetic for this Jeep, it also has a few tricks of its own. 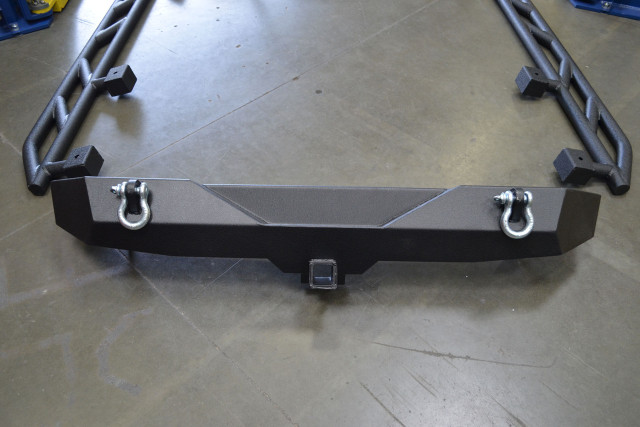 Like the front bumper, the rear piece uses the same two-stage finishing process with an epoxy pre-coat and a textured black powdercoat top layer, and is manufactured from 3/16-inch mild steel plating. The two D-ring mounts are also welded on both the inside and outside for enhanced strength.

It’s capable of accommodating a 37-inch spare tire and it also includes a standard two-inch hitch receiver. And although this rear bumper is not tow rated, Huck explains that there’s still plenty of capability here. “The process of tow rating a bumper is expensive and can open the manufacturer up to liability, which is why a lot of them choose not to tow rate their bumpers,” he said.

“That being said, the bumper is very stout and can be used for any winch or snatch recovery from any situation without concern. The bumper mounts solidly to the frame in three locations, all with heavy steel sandwich plates to ensure a secure connection. One of the locations is in the center of the cross member, similar to how the factory hitch mounts.”

Although the Extreme Terrain bumper isn’t tow-rated, it has a lot more to do with lawyers than it does with the stoutness of the bumper, which mounts to the frame in three different locations and uses the same center location as the stock bumper. The new piece has space for a spare tire up to 37 inches and also includes a standard two-inch hitch receiver. Jeeps didn’t get their reputation for durability by accident, but when you’re about to step your game up in the off-roading realm, the smart money is on doing upgrades like these before having the sudden realization that you need them – like when you’re looking at a massive bill from a body shop.

While it's easy to get fixated on mechanical upgrades that provide more capability, if you neglect to protect your vehicle before hitting the trails, you might end up with a completely preventable repair bill that stalls out your upgrade plans.

These trail-capable components not only protect this Jeep JK, but enhance its look as well. What’s more, the cost of entry is a lot cheaper than straightening out the bodywork and then making the necessary upgrades to protect the vehicle. So head on over to Extreme Terrain’s website to see more great Wrangler products, and be sure to find the Facebook page as well for photos, announcements, promotions, and more.