Reducing on a vehicle’s weight is one way to extend its range. But how practical could that be if we’re talking about the average diesel truck? Chances are, not at all. If anything, a truck is often totally loaded down for the long haul. From hay bales to boats to horses, diesel trucks are entrusted to carry a great deal across a great distance.

But all too often, the trips are cut down by repeated stops at the gas stations. And what a hassle it is to pull over, maneuver truck and trailer through a tiny gas station, and hope that the wait for the diesel pump won’t take too much time. Taking care of a solution is Titan Fuel Tanks. Like all of Titan’s tanks, the 2017 Super Duty mid-ship tank is constructed from cross-linked high-density polyethylene, or XLHDPE. This is a military-grade, cross-linked polymer that’s been integral to Titan’s products since the beginning. 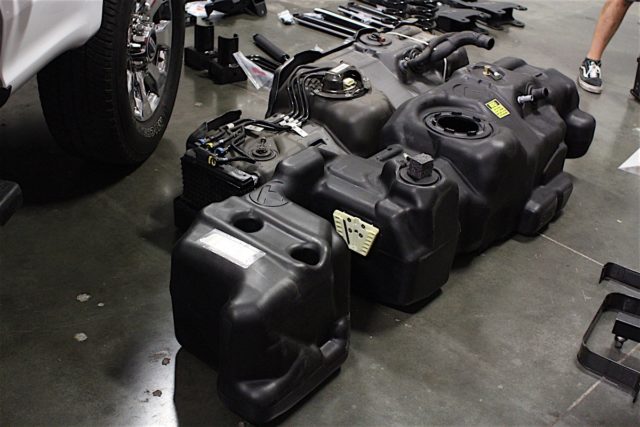 From the factory, the standard material used in fuel tanks is linear polyethylene, also known as LLDPE. LLDPE is traditionally used in food packaging films, but in a more rigid state, it performs well for fuel tanks. It is flexible, durable, and crack-resistant, but it pales in comparison to XLHDPE.

XLHDPE bonds the molecular structures inside the polymer together, making them “bridge” to form a continuous three-dimensional structure. This lets energy be dissipated through the chain of molecules, making for a more rugged structure.

…of the OEM (Linear) models.

“XLHDPE is made of a polymer with strands interlaid with one another, similar to carbon fiber,” said Titan’s Mike Deford. “It’s tougher than steel and aluminum, and is the main reason we feel confident in the lifetime warranty that comes with all of our tanks.”

Coming in at 55 gallons of fuel capacity, the tank is a sizeable upgrade from the one that came stock. At 34 gallons, the Titan tank represents an upgrade of 21 gallons – that’s almost 40 percent more fuel per refill.

Supplementing the tank is the hardware pack. Here, we have black-coated, galvanized steel mounting straps that will keep the tank firmly secured against the undercarriage. The tank is longer than its stock predecessor, and extends just 1.75 inches lower than stock. It’s a small price to pay in clearance for the added benefit of greater distance capability.

Also, the tank has an OEM-style torque ring sending unit mounting system. This system reduces installation time and the potential for mistakes during installation.

As a total package, the mid-ship Titan fuel tank is easily one of the best upgrades we could make for this 2017 F-250. Now, let’s get into the installation phase of our little project. With the tank separated from its electrical and hose connections, we undid the straps and rested the tank on a floor jack for support.

The truck was delivered to us with less than a quarter of a tank of fuel inside. This made siphoning the rest of it out fairly easy to do.

The rubber seal and bolts surrounding the fill spout were removed. Next, we disconnected the electrical connection to the water separator at the front of the fuel tank, as well as the fuel line feeding into the separator.

With all hose lines and most electrical connections undone, we loosened and removed the tank straps front to back. The wiring harness on top of the tank was disconnected, too. We now dropped the tank onto a floor jack and carefully wheeled it out from under the truck, making sure it didn’t tip over and spill any leftover fuel onto the ground. The tank rests on the floor jack as we remove the last of the straps in the rear.

Now, we had to transfer all of the stock components to the Titan tank. We removed the water separator. The sending unit, once free of fuel lines, was taken out as well.

Next, we installed the fill and vent hoses onto the Titan tank, as well as the water separator, fuel lines, and sending unit guard. The Titan tank now looked completely ready to go. We switched back to the underside of the F-250 and reinstalled the electrical connection to the sending unit. The tank was supported by the floor jack, so we were able to hold it in place while we did the installation.

After reconnecting the electronics and fuel lines, the fill hose and vent line were reconnected, as was the fuel fill spout. The rubber seal was put back in its place, and we double-checked everything to make sure it was all good to go. We then poured back in the diesel we had siphoned off earlier, and got the truck started and out of the shop. The new tank was installed onto the truck. Unfortunately, it was too deep to reinstall the stock skid plate that comes on FX4 Super Duties, but that was not a big deal. Once the truck gained an extra four inches of lift from the RBP kit, it would be just fine.

Armed with over 20 more gallons of diesel, we were certain the Titan 55-gallon fuel tank was going to make a difference in the truck owner’s life. We contacted the owner, Tim Wayne, to get his impressions on the improvements the Titan tank created.

“I’m refueling half as often as I used to, which I appreciate,” he said. “We go on a lot of trips to softball games, or down to the Colorado river. We also do trips to Arizona and Utah trips, so the Titan tank will definitely come in handy.”

If you want your rig to go the distance – and then some – then we suggest you check out the Titan website and Facebook page.