Boosting truck, Jeep or hot rod’s power performance by installing aftermarket headers has been a long-standing tradition in the automotive enthusiast world.  In many vehicles, the stock exhaust manifolds seemed to be an afterthought based on whatever engine of choice was stuffed under the hood. To keep costs down, auto manufacturers used cast steel that is not optimized for the performance of the engine. In 1958, Doug Thorley Headers (DTH) recognized this and developed the Tri-Y header design. A revolutionary innovation, the DTH Tri-Y was built using smoothly bent tubes and arranged in a way to maximize exhaust scavenging.

The design uses a four to two to one set up. Four tubes match up to each cylinder, they are then merged into two separate tubes and then again to one at the collector. This tube arrangement meant the firing order of the engine could be kept in mind, allowing the engine to pull more fresh air in as the exhaust gas was pushed out. Internal combustion engines rely heavily on exhaust scavenging. Too much exhaust gas left in the chamber and the cylinder mix is not optimal and not giving as much performance as it could. In the 4 to 2 to 1 set up that Doug Thorley Headers innovated, the primary tubes lineup with each exhaust port and are synchronized with the firing order of the engine. The 4 tubes are brought into 2, then into 1.

For 60 years, Doug Thorley Headers has been making premium American-made components and the Tri-Y has led the charge. Modern engines have improved their designs and still, the DTH Tri-Y is able to pull 25-30 extra horsepower and 35-40 pound-feet of torque out of them.

Because of their trust in their products, Doug Thorley Headers offers a limited lifetime warranty on most of the items they produce. The warranty covers the original consumer purchaser against defective materials and workmanship. Discoloration of chrome exhaust products and dulling of ceramic coatings are considered normal and not part of the warranty. DTH also specifically states against the use of insulating wraps, as they inhibit the proper cooling of exhaust components. 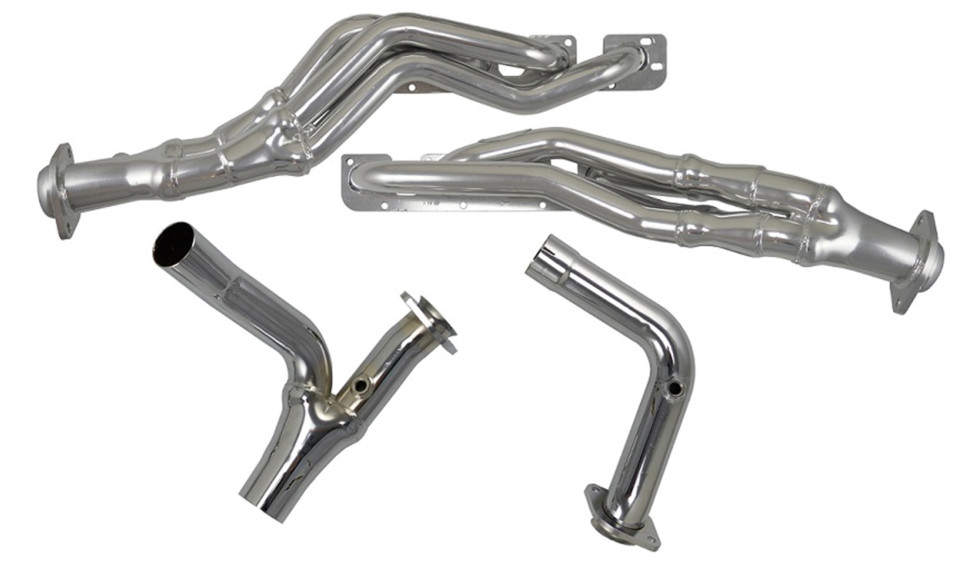 To get a closer look at an installation of DTH Tri-Y headers, we linked up with Fletcher Gray of Rosharon, Texas. Fletcher is a do-it-yourself type of guy and chose Doug Thorley Headers for his 2019 Ram 1500 4×4.

“There are a few reasons I chose Doug Thorley Headers for my truck; one being the fact that the new body style has very few options on the market at this time.” Explained Fletcher. “Most people don’t want to mess around with their newer vehicles simply due to fear of losing any type of powertrain warranty, so manufacturers just simply don’t make them due to the lack of demand.” Fletcher installed his DTH Tri-Ys at home by following the instructions provided with the parts.

“The biggest reason why I went with Doug Thorley is their try-y setup, it offers significant gains in horsepower and they are aesthetically appealing,” Fletcher continued. “Doug Thorley has a huge reputation, they’ve been in business for a long time and invented the Tri-Y setup in 1958, so they have had plenty of time to perfect the craft.”

Installation o the Ram is straight forward. Put the truck on stands and get the tires out of the way. Most of the job can be done through the wheel wells of the truck with hand tools. Typically, the kit Fletcher installed is a direct bolt-on. In his case, however, he wanted to replace the rest of the stock exhaust with some upgrades. After finishing the header install, Fletcher had a local shop replace the rest of the factory exhaust system.

After installing the DTH Tri-Ys, he had the truck towed to a local exhaust shop. They fabricated a completely new system that included high flow catalytic converters for emissions, downstream catalytic converters monitor extensions and dual Flowmaster Outlaw mufflers with five-inch tips sticking out the rear.

When asked after the install what his thoughts were, Fletcher was enthusiastic. “Not only is the undercarriage of my truck eye-catching, but it also sounds fantastic! The truck has a totally different personality. Cruising around town it has great throttle response, and my gas mileage has increased significantly cruising down the highway.

“I have absolutely no regrets about the modifications I have made and is worth every penny spent,” Fletcher finished saying. “At this point in time, I have had roughly 5000 miles put on these headers and so far, haven’t had any issues, leaks from gaskets, or anything breaking. I anticipate these headers should last the lifetime of my vehicle and should be the last set of headers I will ever need!” His Ram 1500 may not look faster, but Fletcher is extremely happy with the results.

At the end of it all, we’re all would all like to squeeze a little more power out of our rigs. Doug Thorley Headers have the premium products and the stellar reputation to handle it. Doug Thorley Header has a talent Research and Development team that is constantly adding to their product line. Visit their website to see what performance products you can get for your vehicle.