Few things suck more than driving along and having coolant pour out of your degass bottle, after spending a ton of money making sure your rig is just right and can do everything you need. Then at a moment’s notice, it happens and there goes a few thousand dollars to fix your head gasket (possibly again). Scheid Diesel uses billet aluminum engine blocks for their premium engine program. These engines are put together with the same ARP fasteners that are available to everyone.

Whether you are looking at upgrading to studs before you have a problem or after, knowing which ARP studs to use can be critical. Deciding whether to upgrade to the Custom Aged 625+ or use the ARP2000 studs is a big decision. Naturally, there are a lot of threads on forums discussing this exact question and where there are lots of discussions, there are lots of good and bad information. We figured we should go straight to the source and call Chris Raschke from ARP to chat about the differences, and when someone should step up.

Before we get into how to choose the right stud for a specific application, let’s first go over the primary differences.

The ARP2000 product is a chrome moly steel alloy. “It is a very good material. It has a 220,000 psi tensile strength. It is going to work and differently strong than a production fastener as far as how much clamp load we can provide. Of course it all starts with getting the best material from the start. ARP2000 starts off as either bar stock or coil depending on how long the stud is. Then we are going to start the process,” explains Raschke. After the manufacturing process, the studs have a Rockwell hardness of 44 to 46 on the C scale. Notice the color of the ARP2000 studs above and then compare them to the Custom Aged 625+ studs below. There is a noticeable difference in color. The Custom Aged 625+ studs are a stainless alloy or a “really tweaked stage of Inconel,” as Raschke put it. The grain structure is Martensitic, which happens when the material is quenched to give the material very high strength. The tensile strength is a minimum of 260,000 psi, but usually comes in around 270,000 to 280,000 psi, and has a Rockwell hardness of 56 to 57 on the C scale. 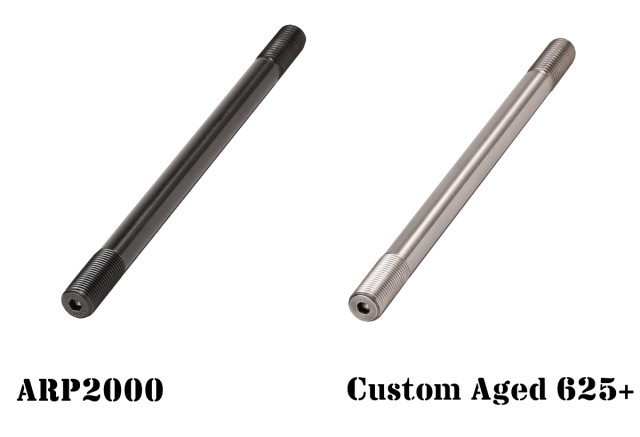 Differences At A Glance

Is there a clear horsepower line or point when Custom Aged 625+ should be used?

The short answer is no. A lot of the stress and problems that can cause head gasket failures aren’t related to the specific combination of parts used on the engine. It is more about the tuning and the way the engine is being run. “When I used to turbocharge Buick Grand Nationals, we could get 800 horsepower on stock head gaskets. It is all about fuel and timing. It is the same basic thing with diesels. If you have a rock solid program like the Haisley‘s or Scheid‘s, they can use ARP2000s for a long time,” explained Raschke.

Programs that aren’t as well developed and tuners who aren’t careful can certainly cause problems pre-maturely. In addition, the way the engines are assembled can make a huge difference. Raschke mentioned a few times of when he received studs back that were rusted, pitted or damaged. Even with studs being made out of a corrodible material, it doesn’t mean they should corrode.

If studs are already in the engine, and the engine is in the process of being torn down, and the nut pulls the stud out, that is an indication there is a problem. Raschke pointed out that there may be issues on the microscopic level that you cannot see and he would recommend discarding the stud and nut. The slightest change in friction in the threads or the interface of the bolt and washer can greatly affect the actual torque being applied to the stud. It is subtle, but the image on the left has Custom Aged 625+ studs and the one on the right has ARP2000 studs

When Should Someone Upgrade Their Studs?

The ARP2000 is really good it works well for most applications for the average guy – Chris Raschke, ARP

“The ARP2000 is really good and it works well for most applications for the average guy. If you have got a guy that’s going over the top on power they should just go to Custom Aged for clamp load. I also look at some of these guys who are taking the cab off the truck and then spending $4,500 in labor just to change studs.”

“To me, wouldn’t it be better to spend a little extra money now and put the best part you can put in? Every race team that I’m involved with now, I do Custom Aged on everything. It is just the best.” commented Raschke.

Raschke went on to mention that if you are running compounds or any big performance stuff, the extra cost of the Custom Aged is just money well spent for the increased safety.

I do Custom Aged on everything. It is just the best – Chris Raschke ARP

When upgrading studs, there are lot of companies and shops with lots of different thought processes on this topic. This is especially true with engines that have a known head gasket issue like the 6.0 Power Strokes. ARP may recommend one torque rating, but a shop may have had good luck using a different rating and the shop increases the torque applied.

“We always send out our studs with our recommended torque and that’s about 20 or 25 percent back of yield. This keeps the stud reusable. I suggest you use Ultra-Torque on the fastener, and if we recommend 210 ft-lbs, but you tick at 235 or 240, then you are taking that stud right up to where it’s going to yield. If you go up to 270, then that stud is way up there in the yield range. So you are really not getting more clamp load, but what happens after 245 is that the stud starts to yield but it’s not gaining any more load. You get the maximum you can fasten but now it’s no longer reusable,” commented Raschke. (Click here to see an article we wrote showing some stress / strain diagrams and it explanations this in more depth.) All of the bolts, studs, and nuts are heat treated to ensure they have the right material properties. How long and at what temperature they are treated to are proprietary and vary by base material.

That is what happens when stock head gaskets are used and just the torque is changed. What about when the head is fire ringed or O-ringed or another gasket is used? “I tell customers if you bought somebody’s fire ring kit or this, that, and the other, and they’ve got the system down, then use their recommendation,” explains Raschke. The bottom line is that by changing the torque applied to the stud, the stud may enter its yield range. If it does, it is no longer reusable. The formula that is used to calculate the torque required does take into account the sealing material. A different torque could be required and by changing the torque, that doesn’t mean the stud is automatically no longer reusable, but having that discussion with the manufacturer would be a good idea. Studs are considered a ductile material. This means that the metal has a certain amount of “stretch” that it can handle before it starts to deform or yield. If the loads applied are within the stretch range, then the material will return to its pre-stretched shape and retain its characteristics. Once the material has started to yield, that material’s physical properties have started to physically change and the material will never be the same as it was before. When it comes to choosing the right stud, if you feel or your engine builder feels they need more clamp load than what the studs you have suggest, it would be better to upgrade to a higher quality stud that can safely handle a higher torque than to yield the studs you have.

The difference between ARP2000 and Custom Aged 625+ starts at the base material. The Custom Aged base material costs more because it is a premium material. The manufacturing process is slightly different, but the main difference is the material itself. The Custom Aged is a higher quality material with a much higher clamping load capability. This is why professional race teams use the Custom Aged 625+. Their engines perform at a higher level and higher clamping loads are needed. Think about your situation. Are you running significantly more boost pressure, pushing your engine to the edge, or are just looking for more clamping load than the stock head bolts provided? In addition to head studs, ARP makes a full line of bolts that can be used on almost every aspect of the engine and vehicle. Starting with page 94, bolts are listed out in metric and standard sizes from 1/4-20 to 1/2-20 and M6x1.00 to M12x1.75. They sell nuts, washers, o-rings, and quite a few other parts as well.