Kahn Design has had a happy and long-running relationship with the Land Rover Defender. Company patriarch Afzal Kahn has created a special one-off edition as a tribute to this relationship. The iconic model has enjoyed a run of 68 years in production. Land Rover announced recently that they would halt production this year and Kahn announced that they would produce this unique tribute vehicle they call “The End.” Kahn Design’s “The End” is based upon the Land Rover Defender 110 model.

Almost Seven Decades of History Comes to an End Land Rover’s Defender has been an extremely popular model for the company for the last 67-68 years. That makes it one of the longest running vehicle models in continuous production. However, it wasn’t always known as the Defender. Its first names were the Land Rover Ninety and the Land Rover One Ten. These were based off the original 1948 Land Rover design. Kahn Design’s “The End” is based on the Land Rover 110. Image courtesy Land Rover.

Land Rover has always been known as a maker of extremely high quality and versatile off-road vehicles. When Kahn Design and Chelsea Truck Company (CTC) remodel them to their specifications, they don’t need to do much to improve the off-road characteristics of the vehicle. Most of the modifications that are undertaken are in the realm of aesthetic and luxury improvements. They start with a stock Land Rover Defender 110 in Santorini Black and go from there. Kahn Design’s X-Lander Grille adorns the front of “The End.”

A team of 3D modelers, materials engineers, and artists get together with the customer to craft interior and exterior modifications that give a meaner and harder edge to the truck. These include fender additions with an industrial look that also looks luxurious, not like the antiseptic looks of an industrial park. In short, the look that is achieved is one of sophistication. Each vehicle produced also has unique features that are decided upon by the design team in cooperation with the buyer. This means that, in effect, each Land Rover Defender produced by the Chelsea Truck Company and Kahn Design is a one-off. Also making each individual truck unique is the fact that all exterior modifications are hand-fit to the individual truck. Some of these include their well-known X-Lander front grille, custom head lamps, quad crosshair exhaust systems, and the Chelsea Wide Arch Kit, and more.

In keeping with Land Rover’s reputation as one of the best off-road vehicles on the market, the design team also upgraded the already excellent suspension, including giving it a lift kit. Kahn Design and CTC also produces a line of custom lightweight alloy wheels that customers can choose from. The most popular of these are the Defender 1948 (an homage to the beginning of the line), the Defender 1983, and Mondial wheels. These are available in a range of finishes.

Taking a Look at the Interior Improvements The most notable interior upgrades are the GTB seats with hand-stitched leather and fabric inserts.

Interior improvements and modifications are mostly in the realm of luxury appointments. Topping this list is the hand-stitched quilted and perforated leather seats that are custom-made by the design team in their UK shops; by hand. Buyers have their choice of colors and seat styles. These seats are available with a variety of fabric trims that includes Harris Tweed.

Fine leather seats with fabric trims aren’t the only interior improvements, however. The stock sill plates are replaced with custom aluminum sill plates. The pedals are also replaced with vented pedals made from machined aluminum. Custom Kahn Designs and CTC floor mats and steering wheels are also included.

These are just the most noticeable changes to the interior however. The design team, led by Kahn himself, touched upon everything inside the vehicle’s passenger compartment, giving it what the company describes as “the look of opulence.” Grab handles, the glove box, door panel inserts, instrument panel, nothing was left untouched. Everything is upholstered to match the seating.

There’s also a wealth of tech that can be added to further customize a Kahn Design Defender. These include rear seat entertainment systems, satellite navigation systems, and rear view parking cameras. Soundproofing and privacy glass are also available. Most power improvements come courtesy of the plug and play ECM supplied by Kahn Designs. 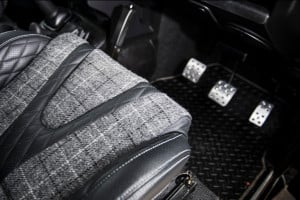 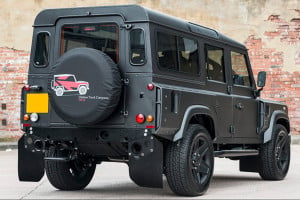 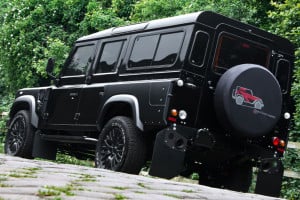 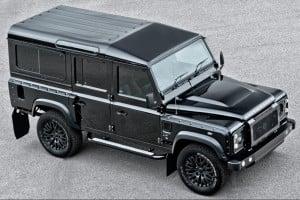 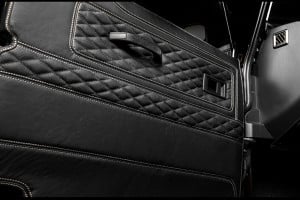 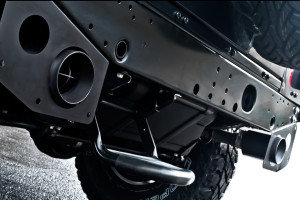