Buying a used truck can be a scary situation. Did the previous owners take care of the vehicle as their baby? Did they abuse it? Did they ever change the fluids on it? All these questions pop-up in your head.

For your humble editor of Off Road Xtreme, Steven Olsewski, it was out to the interwebs to track down a used beater, or as some would say, a truck to drive while working on my other project, Project Storm Trooper. The truck didn’t need to look pretty, didn’t have to have the latest technology, but had to do one job – drive.

The Hunt For A Truck From Facebook Marketplace, used car lots, to Craigslist, I looked everywhere for what would be my next truck. There came a point where financing came to mind, but at the end of the day who wants a payment.

Looking for trucks on a budget of under $2,000 can bring up some frightening looking vehicles. Trucks leaking like Niagra Falls to interiors that looked like a puppy had a field day all come up. With a little patience, I knew that the right one would pop up

Some say vintage others say junk, but in the end it is still a truck.

After weeks of looking online and seeing some in person, I stumbled upon a fire engine red 1992 Chevrolet Silverado K1500 with over 173,000 miles. The truck had the 350ci V8, four-wheel drive, and a six-inch Rancho lift kit.

I headed out to Rancho Cucamonga, California with a fellow editor ironically, in a red C4 Corvette, to check out the truck in person. The owner was asking $2,100 for the truck, but knew I could work some magic and get a better price.

Upon arriving, the rig was exactly what I was expecting, a 1992 truck. Walking around the 25-year-old truck revealed war wounds, but was nothing that didn’t add some character. The paint had seen better days, with plenty of chips and scratches. The interior of the truck was the same story with battle scars and a whiff of tree air freshener. It was pretty high end for its day with full power options and a cloth, factory bench seat. The previous owner had replaced the radiator, spark plug wires, and even put a new stereo in. The carpeted dash cover hid a broken up dash that looked like it was used for bowling practice. If left undisturbed, no one would be the wiser…

Taking a used truck for a test drive can be the trickiest part of all. Aside from surging emotions and acclimating to an unknown rig, many value judgments need to be made in a short period of time. The truck drove better than I thought and had no weird clunks or squeaks. The Rancho torsion bar drop down brackets are faded, but still do their job.

Pulling back into the owner’s neighborhood, it was time to make a deal. The owner presented all the right paperwork, receipts for everything he had done, and the negotiating started.

When the dust and dollar signs settled I was able to pick the truck up for $1,700. A more than fair price for the truck, but also just the right deal that I was looking for. To top it all off my son always wanted a red truck.

Plans For The Build With the truck now in my possession and under my watch it was time to go through the vehicle and get more familiar with my newly christened purchase – “Big Red.” While crawling under the vehicle and inspecting all its crack and crevices, thoughts of where to start and what to do ran through my mind.

I did not want another massive build like Storm Trooper, but something that would work as a daily driver, be fun in the dirt, and possibly do a little bit of towing. The thought came to me on building a dirt worthy off-road vehicle with a $5,000 budget.

It is always a plus to have aftermarket products installed on a used vehicle purchase.

The budget would allow room for improvements, mechanical fixes, and possible maintenance that needed to be done. There would be no massive motor swap or build out of reach of the average DIYer, but a build that can get any off-road first timer on the trails, or a veteran off-roader back in the dirt.

The truck is the perfect candidate for this build with support like any of the great off-road rigs. Purchasing the truck with a lift on it already put us ahead of the game. Upon further inspection of the truck and removing the rear wheel center cap, I came across a curveball. Not one of the harder pitches to hit in baseball, but an automotive kerfuffle nonetheless. The front of the truck was Chevy’s standard six lug wheels, but Big Red was wearing five lug shoes on the rear. 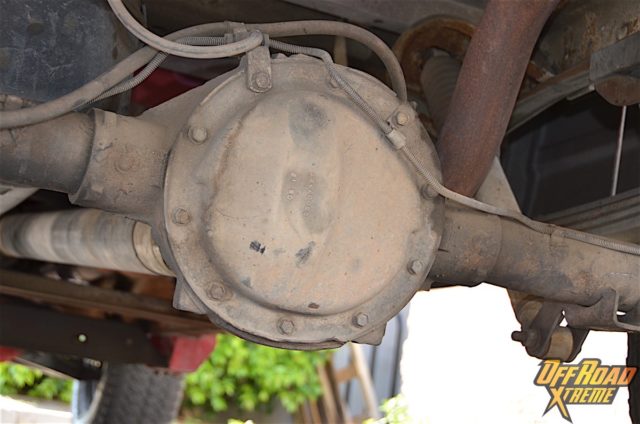 Someone at one point thought that it was going to be a great idea to take out the factory axle and swap in a Chevy 10-bolt. For obvious reasons this would not work for us and thus the first item to our list was added – an axle.

There are tons of options out there. Keeping costs down will most likely dictate a junkyard picked axle, but since upgrading is the name of the game a Chevy 9.5-inch, semi-float, 14-bolt would be the choice. This axle is a huge upgrade to the truck and will help while off-roading or towing.

While we were under the truck, we noticed the shocks and bushings had seen better days. The shocks that are on the truck seem like they are from the late nineties when the lift kit was possibly first put on. Along with the shocks, I could see that the bushing across the truck were shot, especially the ones on the rear of the cab.

Mismatched wheels are never a good thing, even worse when you have two different lug patterns.

Our laundry list of parts continued to grow and the amount of work that was needed would not outgrow the future ability of this truck. The parts and installs will be shown in the garage or driveway. This is a project that someone can do on their own and not need a ton of different tools.

Keep checking back to Off Road Xtreme for all the latest on Big Red and stay up-to-date on what we’re up to. What else should we look at doing on our $5K budget build? Tell us in the comments below!