For some time now, there has been some debate and confusion over the differences between a Trophy Truck, a Trick Truck, and a Spec Trophy Truck. With this in mind, we did some research on this subject and came up with what we believe are some pretty definitive answers. Before we get into the details, let’s explore the basics. When you start talking about any of the trucks listed above, one of the first things that most likely comes to mind is this: a vehicle with massive amounts of suspension travel, powered by a mega horsepower motor, and purpose-built for racing in an off-road environment. All of this is true, but one fact remains–the Trophy Truck is the fastest and most recognized vehicle competing in off-road racing today. Designed and built to look like a factory-produced pickup truck, this class is hands-down the most popular with the off road race fans and enthusiasts. These top-shelf, desert-running rocket ships are capable of speeds exceeding 120mph, although actual average race speeds can be significantly slower depending on the venue. These type of speeds are generated with a (most commonly) naturally aspirated V8 engine generating anywhere between 700 to 850 horsepower, depending on the individual engine builder. The trucks feature a tube frame, chromoly chassis and roll over cage, and these designs can vary slightly from manufacture to manufacture. Suspension geometry and design are normally dictated by the builder constructing the truck; however, most utilize an A-arm suspension system on the front of the truck, and a three or four- link system with a solid axle in the rear. There are chassis available that employ various types of independent rear suspension systems, but the four-link systems seem to be the norm. 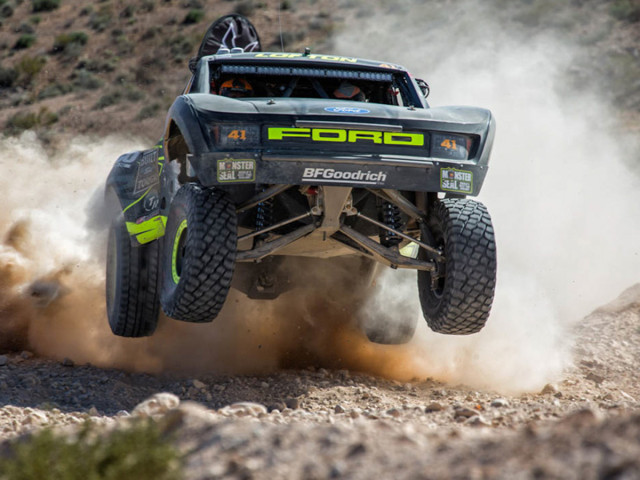 As is the case with any motorsports, off-road racing is expensive.The typical top-tier race truck can cost anywhere between $250,000 to $500,000. Throw in another $200,000 to cover the basic expenses involved with running a complete season (fuel, tires, extra parts), as well as $200,000-$400,000 to maintain the team (race vehicle, hauler, and chase vehicles), and with just simple math you can easily see it requires a large amount of wealth to participate in this sport. Keep in mind that the winner’s share of the purse very rarely exceeds $10,000!

Suspension damping is controlled with either a one- or two-shock system per wheel, depending on the individual builder. Considering the terrain normally encountered with these trucks and their rather hefty weights–a typical Trophy Truck can weigh in excess of 7000 pounds–a two-shock system seems to be the standard. A coilover shock combined with a bypass shock works well and helps prevent overheating and fading at high speeds, due to continuous cycling of the system over the rough desert terrain.

The trucks are of course designed for speed, but even the rigors of a 250-mile race through the desert offer a very unique set of challenges for these trucks; trees, brush, rocks and boulders are just some of the normal obstacles the pilots of these machines have to deal with, so durability is a foremost concern during the construction of the vehicle. “We want the trucks to be as agile as possible, but still maintain a degree of longevity,” stated Matt Loiodice of JIMCO Racing . The old adage of “first you must finish to finish first” really applies to the sport of off- road racing. Finally, one of the most important and often overlooked part on the trucks are the tires. The trophy trucks ride on desert specific tires. They vary from manufacture to manufacture, but all feature a multi-ply sidewall to help prevent cutting, or punctures during competition. Tire size can also vary anywhere from 37 to 39 inches and are considered as an integral part of the overall suspension. Concerning the Spec Trophy Truck, Loiodice explains, “The ones that come out of our shops are produced using the same platform as our trophy truck. The primary difference is the Spec truck is required to run the stock LS3 GM motor or the Ford equivalent, and other than a few minor exceptions to the chassis and suspension, the truck is basically the same.” There are a few minor differences in the design and construction of a trophy truck, depending on the manufacturer, but primarily, the trucks all sit on a wheelbase that is between 125 to 130 inches, the overall track width is between 89 to 95 inches, and the fuel capacity varies from as little as 65 gallons up to 100 gallons, as determined by each individual race team. Different builders use different GPS and radio systems as well as different air pumps that provide fresh air to both the driver and co-driver. So, as you might imagine, these trucks are an engineering marvel, the designs all have their differences from builder to builder, but they are all equally impressive in form and function. So if these mechanical marvels are pretty much all the same, why is it that in some circles, they are called Trophy Trucks, and other circles they are known as Trick Trucks? The answer is not nearly as complicated as one might think. Some time ago, the Southern California Off Road Enterprises (SCORE) made a business decision to apply for (and subsequently received) a copyright on the term “Trophy Truck”, “Class 1 Trophy Truck”, “Class 10 Trophy Truck” and “Spec Trophy Truck.” This, of course, was intended to keep any other companies (sanctioning bodies) from using these titles without either (A) obtaining written permission from SCORE to use said titles, (B) pay a licensing fee to use the titles, or (C) all of the above. Trophy Truck is a copyrighted title owned by SCORE, and other sanctioning bodies, such as Best in the Desert (BITD) are prohibited from using these copyrighted titles, meaning they had to retitle, if you will, the same exact class of vehicles for their promotional and marketing endeavors.

If there’s any big differences between Trophy and Trick Trucks, it’s that the BITD version is now permitted to run with forced induction per the “Engine Transmissions & Drivelines” header in the BITD rulebook. The rule, SCR33, states that turbochargers and superchargers are allowed to run on gasoline-powered mills in either the 1400 class (Trick Truck) or 1500 class (Open-Wheeled Vehicles Unlimited Single & Two-Seat Vehicles). At the time of this writing, BITD doesn’t maintain any restrictions on the sizes or setups of turbochargers and superchargers used in competition.

But regardless of what event you attend, or what you call them, these trucks are the fastest, most popular vehicles involved in organized off road racing today. Many thanks to Matt Loiodice and JIMCO Racing for the help and assistance with this article.