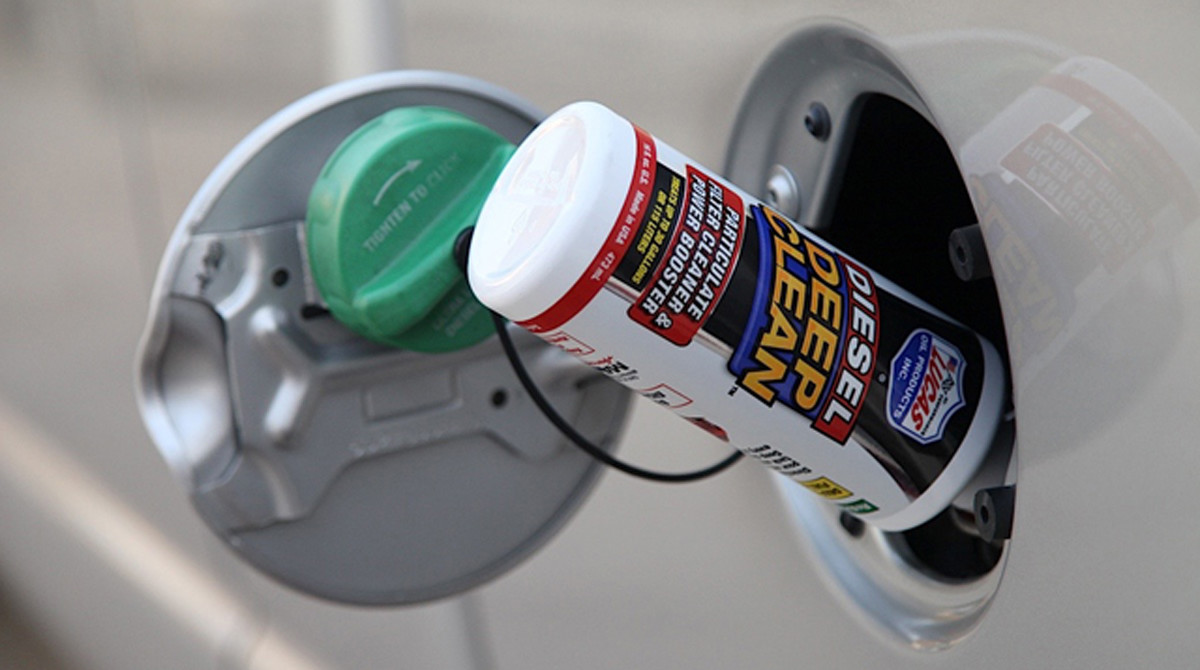 Anyone with a late model diesel knows the nightmare of the Diesel Particulate Filter. DPFs are emission control devices designed to remove the soot or solid matter present in the exhaust gasses produced by diesel engines. The DPF is a device resembling a catalytic converter on a gasoline engine and employs similar technology. Exhaust gasses are passed through a honeycomb like matrix of passages, either constructed of metal or ceramic this core is susceptible to clogging.

When a particulate filter becomes clogged the narrow passageways are literally packed with block soot. A regeneration process helps to clean out the clogged filter but takes time. Lucas Oil Diesel Deep Clean acts as a chimney sweep for your DPF.

Lucas Oil supports many forms of motorsport, diesel enthusiasts are most familiar with the Lucas Oil Pro Pulling League

I spoke with Forrest Lucas, the head of Lucas Oil and a devoted proponent of individual rights. Lucas is not only an entrepreneur and businessman he has worked as a long haul trucker, sponsor of many prominent racing organizations, and started the activist group Protect the Harvest, defending the rights of sportsmen, farmers, and ranchers since 2011.

In order to get a better understanding of the benefits of Lucas Oil Diesel Deep Clean I asked Lucas to tell me more about his experience with the problem of clogged DPFs and how he went about engineering a solution. As a former trucker himself, Lucas understands the priorities of the trade, keeping on schedule, proper maintenance, and minimizing down time.

Now the head of a major automotive fluids company he has a fleet of trucks of his own to keep on the roads. Back in 2007 when DPFs started becoming a standard occurrence on 18 wheelers, Lucas was backed against a wall with the problem of clogged DPFs. Forced to replace, or retrofit trucks he new there had to a better solution to this problem.

Lucas described his frustrations with the situation saying; “Sensors go out…[it was a] nightmare, trucks filled all the time and it would take three to four days to change a DPF”. The costs of replacing the particulate filter can be astronomical, several thousand dollars on some vehicles.

Don’t neglect your DPF, the breakdown and replacement can be costly. Photo Courtesy of Banks Power

Taking his problem into the laboratory, Lucas went in search of a solution that could be added to fuel preventing, correcting and eliminating the clogging caused by particulate backup in filters. Working with his own 2009, and 2012 year model trucks, and a fleet of trucks for the city of Indianapolis, Lucas developed the Diesel Deep Clean additive.

According to Lucas, Extensive lab testing showed after just one tank of fuel with additive exhaust pressures were reduced, and 30-percent of particulate matter clogging the filter was gone. He recalled a particularly bad case; “[A] freight truck stopped up so bad it was regening everyday for 45 minutes. After a couple bottles it went back to regening every couple weeks.”

“[A] freight truck stopped up so bad it was regening everyday for 45 minutes. After a couple bottles it went back to regening every couple weeks.”

“We did lab tests from A to Z” Lucas explained, he writes the labels and is dedicated to doing the proper testing and research before making a product claim.

The Diesel Deep Clean additive not only cleans the particulate filter on your big rig or pickup truck, it also carries additional benefits. Because exhaust back-pressure is reduced, and stray emissions are burned up, your truck runs more efficiently. The result of this improved running condition is extra horsepower, better acceleration, and improved emission output. After just one tank you can expect to see improvement.

Continual use of the additive may prevent the eventuality of ever replacing your DPF, Deep Clean use intervals range from a bottle every tank to a bottle every oil change depending on the urgency of your needs.

The Lucas Oil Diesel Deep Clean is available in 16 oz bottles that treat up to 30 gallons for pickup trucks, and 1/2 gallon jugs that treat up to 120 gallons for semi-trucks. Available at many auto-parts stores, and coming to truck stops across the country and internationally, this additive will help keep your load moving down the road instead of being plagued by DPF problems.

Common contributing scenarios that cause clogged DPFs include slow driving situations, like traffic. The prolonged time at low speed means lower exhaust temperatures, which degrade your truck’s emission equipment to do their jobs properly.

So if you have ever had problems with a clogged DPF or want to prevent ever having problems, this could be your fix in a bottle.

SEMA 2021: K&N Engineering Focuses On Fine Details For The Future